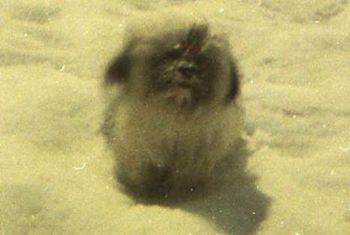 Christine Jorgensen is a Pioneer of Our Community.

Many of we who lived during Jorgensen’s life have our personal experiences or stories.

My father made frequent, rude comments about Jorgensen throughout my childhood.  According to both my father’s DD-214 military record and Jorgensen’s published military record, there was a time when they both served at the same location.  I didn’t learn about this til after my father’s death – he died about the same time as Christine – so that became one question that I didn’t know to ask him throughout his own life.

When he died, my father left evidence that possibly indicates that he had contact with either Christine herself, or someone in her family, or someone close to her.  I have corresponded with people who identified themselves being among Jorgensen’s inner circle.  I asked them to clarify anything.  The results have so far been inconclusive.

The deaths of Christine Jorgensen, Billy Tipton, and my father at nearly the same time three decades ago create a lasting impression upon my own life experiences.

Speaking of Billy.  Surely my mother would have heard of Tipton through her careers in the entertainment industry:  she was a part-time movie and TV actress, she performed in Community Theatre at several cities across the nation, she worked in radio, she performed in radio and TV commercials – all during the 1950s through the 1990s.  What were her memories that she could have shared about him?

Thank you, Christine and Billy, for being Pioneers in my life. 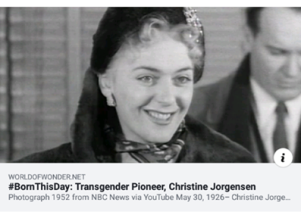 #BornThisDay: Transgender Pioneer, Christine Jorgensen
BY STEPHEN RUTLEDGE ON MAY 30, 2019 3:05 AM

– ‘Remember, never throw away a chance for happiness too quickly… it can get to be a habit.’

Before freedom found Chelsea Manning two years ago, before the lovely Laverne Cox, before the late, great Alexis Arquette, before Chaz, even before Bruce Jenner broke the big news to Diane Sawyer and the rest of the world that Caityln had arrived, there was a little boy from the Bronx who became a lovely lady.

It was 1952 and Science was still a popular subject, unlike our own times. Engineers were able to build rocket ships, researchers could cure diseases, and medical doctors were able to turn a seemingly regular guy into a glamorous woman. This was an era before there was a T in the Equal Rights movement, before there was even an L,G, or B, much less a Q. In fact, Transgender wasn’t even a term yet.

Recently discharged Army Private George Jorgensen made headlines around the world when he returned to the USA from Denmark as a blond woman named Christine Jorgensen. Jorgensen shocked the world and freaked out most Americans. People were afraid and angry. They still are.

While serving in the Army, Jorgensen, who said that she had felt trapped in the wrong body since childhood, read an article about a doctor in Denmark who was experimenting with sex change and hormone therapy.

Brave Jorgensen was just 24-years-old when she made the journey to Copenhagen to meet with Dr. Christian Hamburger who diagnosed the young GI as “transsexual”. Hamburger prescribed female hormones and encouraged Jorgensen to dress in women’s clothing. Hamburger and a noted psychologist had to petition the Danish government for permission to perform the illegal act of castration for surgical purposes.

Hamburger successfully changed Jorgensen’s special stuff from male to female. Jorgensen chose Christine as her new female name in honor of her doctor.

Her transition made headlines when she returned to the USA. Curious crowds and eager journalists showed up at NYC’s Idlewild Airport to cover her return from Denmark. The December 1st, 1952 headline on the cover of the NY Daily News read:

– ‘At first I was very self-conscious and very awkward, but once the notoriety hit, it did not take me long to adjust.’

Jorgensen was resourceful and like any true blue American she was able to take that media attention and turn it into nightclub engagements. With a straight face, she sang I Enjoy Being A Girl and Bewitched, Bothered And Bewildered as part of her act. My city of Portland’s own Mary’s Club, the oldest strip club in the USA (Portland still has more strip clubs than churches) engaged Jorgensen with a gig as a go-go girl. Often the butt of television comedians’ jokes, she still always kept a sly sense of humor about herself.

Jorgensen didn’t hide away. She became the first, but certainly not the last, transgender American to grab all that publicity about her transition and run with it, so to speak. All network news broadcasts, every major magazine and newspaper, and every popular radio show covered her transition. Books were written about her. She smartly wrote her own: Christine Jorgensen: A Personal Autobiography (1967), a bestseller in 12 languages, adapted into a film in 1970. The memoir begins with this succinct first line:

– ‘Nature made a mistake which I have corrected.’

She got a record deal and released Christine Jorgensen Reveals, a spoken-word album where she was interviewed by comedian Nipsey Russell(not to be confused with the recently deceased rapper Nipsey Hussle). She even cut a few singles. Jorgensen made $12,000 a week performing her stage act in Hollywood. Other people who were considered “cross-gender” always existed, but no one had the guts to go public, become famous and make money until Jorgensen.

– ‘I decided if they wanted to see me, they would have to pay for it.’

Just like in our own 21st century, the U.S. government didn’t know how to handle a change in gender. She sought a marriage license in 1959 but it was denied because her birth certificate classified her as male. She had worked as a chauffeur, but her permit was revoked. She had difficulty finding a place to pee.

Jorgensen claimed that public reaction to her surgery was one of the first steps in the new sexual revolution of the 1960s. She said that she never regretted her decision. The public acceptance of Jorgensen as a woman showed that gender and the body were not always connected, and that gender was something that a person could create. This changed the world in no small way.

Jorgensen lived a quiet private life after her celebrity had run its course. She resided at the famed The Chateau Marmont in Hollywood, occasionally taking speaking gigs. Lovely to look at, smartly dressed, with a smoky, sexy speaking voice, she would have been perfect for today’s television reality programming. I am sure that here at World Of Wonder Productions, we would have had a place for her in our smart line-up. Maybe a cooking show. In fact, at the end of her life she said that her only real regret was not having appeared on Murder, She Wrote (an achievement that I did manage).

With the divine Divine at the first annual party of the Limelight disco in Atlanta, 1981, from Transcity via YouTube

She never married and lived alone. Jorgensen took her final curtain call in 1989, gone from that damn cancer. She was just 62-years-old. I like to imagine her still alive, living as the queen of the movement that she gave voice to.

– ‘Does it take bravery and courage for a person with polio to want to walk? It’s very hard to speculate on, but if I hadn’t done what I did, I may not have survived. I may not have wanted to live. Life simply wasn’t worth much. Some people may find it easy to live a lie, I can’t. And that’s what it would have been… telling the world I’m something I’m not.’ 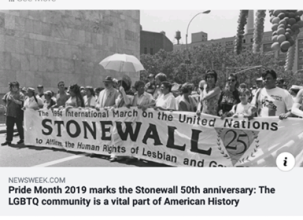 Until at least some point during the 2000s, ‘Transsexual’ was the medical condition applied to and used only during one’s Transition.  When you completed your Transition (however you determined), then you were no longer ‘Transsexual’, you were (as for me) a woman.

My medical records document that process.  My Internist stopt using ‘Transsexual’ on my documents once I made it to full-time (1985).  It was like receiving my graduation certificate when I received a copy of my first medical record where it reported me as simply ‘Female’.  No more ‘Transsexual’ qualifier to my status.

Frustrating nowadays.  My current medical Team Sharon insist using either ‘Transsexual’ or ‘Transgender’ on my medical records identification.  I told them that neither apply, explained the history, and that at least I’d rather that they NOT use ‘Transgender’ because I never changed my Gender, I only changed the presentation of my Sexual Identity.

Thank you for visiting today.

Thank you for reading the articles.

Thank you for paying tribute to our pedecessors.

Thank you for slogging through my ramblings.

Thank you for browsing through the Additional Resources section for additional information about this essay and the articles.

‘Thank you’ to the Resources who make this web-site possible.

Be nice to one another.  Keep your words and actions kind and decent; no insults, we are better people.

Please return for another essay.

Musings of a woman who happens to be transgender

HRT Options, Best Practices, and some other semi-related stuff...

The 1960s and 1970s: Sex, Drugs and Rock 'n' Roll! . . . True Chronicles of Life and Living during the Historic Cultural Revolution that Altered Society Forever! . . . Setting history straight for those interested parties of any near or far distant future curious of life in that mystical land of the '60s and '70s.. . . Magick was afoot!

A long journey to find myself

Marissa in the Making

The Personal is Empirical

We stand at the crossroads of gender balanced on the sharp edge of a knife.

every man's struggle: 40 something reclaiming identity and meaning