Everything in this list (see the attached article) is so true for me!

Lemme give a few examples how Inter-sex has been for my life:

From the article and speech:

Morgan Carpenter was a plenary speaker at Courageous Voices, the LGBTI Mental Health Conference 2014. Morgan spoke for 15 minutes on mental health and cultural issues as part of a wide ranging plenary session with Gávi Ansara and Margaret Maymen on LGBTI issues, religion, culture and also intersex. 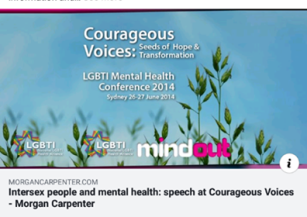 I’m the president of Organisation Intersex International Australia. OII Australia is an unfunded volunteer-run and intersex-led organisation that promotes the human rights and bodily autonomy of intersex people, and provides peer support, training, information and education.

I’m going to talk briefly about what intersex is, and how it relates to LGBTI, so I’ll:

introduce intersex to cover some of the basics, and help build a deeper understanding,
talk about how intersex is relevant to LGBT alliances, key health issues, some cultural and religious issues, and their mental health impact.

Intersex is not about gender identity; intersex people have a broad range of gender identities. There are intersex men and women, and probably most non-binary people are not intersex.

Intersex is a lived experience of the body. Intersex people have non-heteronormative bodies, bodies that affect perceptions of our realness as men or women.

Intersex people are born with atypical physical sex characteristics, including genetic, hormonal and anatomical differences. Many forms of intersex exist; it is a spectrum or umbrella term, rather than a single category. It can include differences in the number of sex chromosomes, different tissue responses to sex hormones, or a different hormone balance.

Intersex differences may be apparent at birth. Some common intersex variations are diagnosed prenatally. Some intersex traits become apparent at puberty, or when trying to conceive, or through random chance.

Intersex bodies do not meet societal expectations. Cultural, familial and medical attitudes govern to which sex we are assigned. Surgical and other medical interventions are made to ensure we conform to those norm, to erase intersex differences.

This has profound consequences for our physical and mental health.

Intersex people are regarded by medicine as having ‘Disorders of Sex Development’ (DSD). The term and framework ensure that sterilisations and normalising genital surgeries continue today, in Australia, to make infants and children “appear” stereotypically male or female.

A 2006 clinician document that coined DSD defined “psychosocial” therapeutic rationales as including “minimizing family concern and distress”, and “mitigating the risks of stigmatization and gender-identity confusion” [1].

A medical paper published this year still describes an intersex birth as a “challenging clinical emergency” [2].

It isn’t just an issue for children: the impact is lifelong.

Adults, too, are subject to coercion. For example, in competitive sports, the International Olympic Committee mandates that national authorities, “actively investigate any perceived deviation in sex characteristics”. Other sports codes follow suit. This means that “butch women” in particular are at risk of being singled out.

A British Medical Journal article in April documented how 4 women athletes from developing nations were subjected to clitorectomies and removal of their gonads – with no guarantee of continued access to medical treatment for the rest of their lives [3].

Most intersex people are heterosexual, most are not trans, we’re a different community, so what’s the relevance for LGBT people?

Research on intersex foetuses and infants is longstanding, and has been used (so far unsuccessfully) to establish a cure for homosexuality.

A 1990 peer-reviewed article by Heino Meyer-Bahlburg entitled, “Will Prenatal Hormone Treatment Prevent Homosexuality?” considered how research on intersex differences could be used to explore the potential “prenatal hormone screening or treatment for the prevention of homosexuality”. While his research showed the “scientific groundwork” to be “insufficient” at that time, prenatal screening and treatment of intersex traits continues [5].

A 2010 medical paper talked about how “low interest in babies and men – and even interest in what they consider to be men’s occupations and games – as “abnormal,” and potentially preventable with prenatal dex”. Prenatal dex treatment remains available in Australia [5].

In some intersex variations, such as 47,XXY, we know that up to 88% of foetuses identified are terminated, framed as major genetic defects – despite the WHO acknowledging no impact on life expectancy and often goes undiagnosed [6].

In October 2013, the American Journal of Bioethics published 11 papers on the ethics of genetic testing in embryo and cells before IVF [7]. A quote from one of them reads:

So, we’re different to issues of sexual orientation or gender identity, but our issues are related and we belong here.

Our major health issue remains outstanding. In October 2013, a Senate Committee reported on the “Involuntary or coerced sterilisation of intersex people in Australia [9]. It said:

Normalising appearance goes hand in hand with the stigmatisation of difference…

The surgery is intended to deconstruct an intersex physiology and, in turn, construct an identity that conforms with stereotypical male and female gender categories.

Irreversible medical treatment, particularly surgery, should only be performed on people who are unable to give consent if there is a health-related need to undertake that surgery, and that need cannot be as effectively met later, when that person can consent to surgery.

The report described preconceptions of “normality” underlying intervention as raising “disturbing questions”. For example, a 2011 Dutch study of physicians’ views on the desirable size of women’s labia minora found that male doctors were more likely to recommend reduction surgery than female doctors [11].

The Senate Committee report said that it “does not favour the status quo” – but it remains to be implemented.

What I’ve described so far is pretty much true anywhere that Western medicine is available.

If we look at religious and cultural responses to intersex, culture is almost more important.

In Malaysia, a classic study on intersex showed that assignments of infants with the same intersex variation differed depending on the parent’s culture, with Malay parents far more willing to consider female assignment (and surgeries) than Chinese or Tamil parents [12].

In Uganda and some other parts of Africa, responses to an intersex birth can involve the stigmatisation of the mother and infanticide [13]. Funder-led shifts from “LGBT” to “LGBTI” alliances have created an additional layer of complexity and damage.

White Australia has culture, too.

Female Genital Mutilation is criminalised, with no exemptions for “cultural, religious or other social customs” – however, there is an exemption for surgeries to “give a female, or a person whose sex is ambivalent, the genital appearance of a particular sex” [14].

Yet at the same time, the State of Victoria has published guidelines for medical intervention, and psychosocial rationales for surgery explicitly include cultural issues, including “reduced opportunities for marriage”.

Surgeries are carried out on infants with Congenital Adrenal Hyperplasia assigned as girls, that are identical to surgeries that are considered “female genital mutilation” in non-intersex girls.

Intersex women need to be part of conversations about women’s health.

What of religious responses? In a 2012 hearing on marriage equality we heard from Chris Meney of Catholic Life, Marriage & Family Centre, Sydney, who said:

People suffering from Turner syndrome, Klinefelter syndrome and things of that ilk are typically infertile or regarded as being mentally handicapped in some way. Many things about marriage require people to have the capacity to consent to what marriage is all about, so a significant mental incapacity might be something that might mitigate against a person being able to consent to a contract of marriage [15].

Rabbi Gutnick, President of the Organisation of Rabbis of Australasia, said:

In Jewish law a person who is of indeterminate sexuality, depending on the nature of that, is considered to be a male and is permitted to marry a female [15].

The US Southern Baptist Convention took a resolution on “transgender identity” this month to their recent conference that also considered intersex to be a physical manifestation of “human fallenness” [16].

Religion is not all the same. I’ve talked with human rights advocates from Pakistan who describe how intersex kids there are traditionally able to choose their gender in adolescence.

Here, the Salvation Army published a report of a training session with Tony Briffa of OII Australia, headlining it “Made in God’s image” [17].

Consider, what does it mean for your mental health:

There’s 60 years of medical research, but little on mental health outcomes; most focuses on genitalia, or psychosocial development. Most contains sampling and selection bias, such as selecting patients treated only at a particular hospital with a specific approach, such as using chronically ill people as a control group and calling the outcomes “normal” [18].

In a study of 37 patients, where 36 had undergone surgical interventions (Schützmann et al, 2007):

The prevalence rates of self-harming behavior and suicidal tendencies in the sample of persons with DSD were twice as high as in a community based comparison group of non-traumatized women, with rates comparable to traumatized women with a history of physical or sexual abuse [18].

We need clear, consistent messages, that promote an understanding of intersex as a range of innate physical variations in sex characteristics.

We need recognition of who we actually are and what our issues are. We need allies who will challenge misconceptions.

We seek an end to stigmatisation and pathologisation.

Intersex people need self-determination and bodily autonomy, and freedom from shame and stigma. 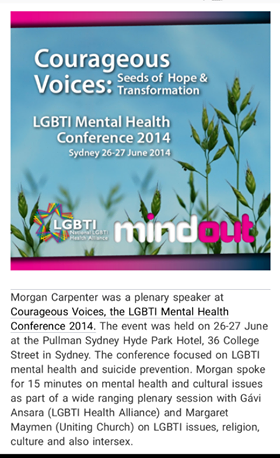 Find out more about the conference here

[2] Pasterski, Mastroyannopoulou, Wright, Zucker (that Zucker) and Hughes authored a paper entitled Predictors of Posttraumatic Stress in Parents of Children Diagnosed with a Disorder of Sex Development in Archives of Sexual Behavior, in February 2014, referenced in Intersex health and wellbeing: the role of parent counselling in two contrasting studies.

[5] Articles “Will Prenatal Hormone Treatment Prevent Homosexuality?” referenced in Fifth submission to the Senate inquiry on ‘Involuntary or coerced sterilisation of intersex people in Australia.

[6] Terminations of foetuses, referenced in Submission on the ethics of genetic selection against intersex traits.

[11] Reitsma et al, referenced in Fifth submission to the Senate inquiry on ‘Involuntary or coerced sterilisation of intersex people in Australia.

[12] Kuhnle and Krahl, 2002, The Impact of Culture on Sex Assignment and Gender Development in Intersex Patients, in Perspectives in Biology and Medicine, volume 45, number 1 (winter 2002):85– 103, The Johns Hopkins University Press.

[14] See Third submission to the Senate inquiry on ‘Involuntary or coerced sterilisation of intersex people in Australia.

[18] See Third submission to the Senate inquiry on ‘Involuntary or coerced sterilisation.

I acknowledge that I live and work on Gadigal Land. I pay my respects to past, present and emerging Elders. 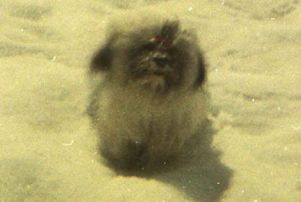 Thank you for visiting today.

Thank you for reading the included articles.

Thank you for bearing with my personal reminiscences.

Please return when I shall have added Additional Resources for further information about this essay and the articles.

‘Thank you’ to the Resources who make this web-site possible.

Be nice to one another.  Keep your words and actions kind and decent; no insults, we are better people.

Please return for another essay.

Transfeminist perspectives on culture and politics

My rebirth as Alita Jean

Musings of a woman who happens to be transgender

HRT Options, Best Practices, and some other semi-related stuff...

The 1960s and 1970s: Sex, Drugs and Rock 'n' Roll! . . . True Chronicles of Life and Living during the Historic Cultural Revolution that Altered Society Forever! . . . Setting history straight for those interested parties of any near or far distant future curious of life in that mystical land of the '60s and '70s.. . . Magick was afoot!

A long journey to find myself

Marissa in the Making

The Personal is Empirical

We stand at the crossroads of gender balanced on the sharp edge of a knife.

every man's struggle: 40 something reclaiming identity and meaning